Get prices for our sample testing services

Rheological profiling can deliver a wealth of valuable information for the formulator of eye drops for the relief of dry-eye, or keratoconjuctivitis sicca. 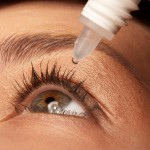 To achieve these properties, eye drops for dry eye conditions are often formulated with the addition of dissolved polymer viscosity modifiers. Polymer-thickened formulations typically exhibit non-Newtonian, shear-thinning and viscoelastic behaviours; it is the unique combinations of these properties that impart each formulation with its own particular nuanced characteristics.

On the ocular surface, shear conditions vary from virtually at rest, when the eye is motionless, to the high shears imposed during blinking. Recent research in the field of dry eye treatments has identified two rheological properties as key contributors to the functionality:

Zero-shear viscosity: At very low shear rates the viscosity of an ostensibly shear-thinning polymer-thickened eye-drop formulation plateaus at a maximum value. A high zero-shear viscosity has been proposed as conducive to longer ocular surface residence times.

Viscosity at “blink shear rates”: The shear rates present in the tear film during blinking have been estimated from 4000 to over 28000 1/s.  An eye drop viscosity approaching that of normal tears at these shear rates helps prevent the user experiencing blurring and noticeable discomfort during blinking.

We profiled four popular eye-drop formulations marketed for dry eyes that feature a range of thickeners to demonstrate the variety of rheology attributes that result:

The latter two products could be described as representative of the high thickener concentration “super-lubricants” moving into the marketplace.

A high-performance rheometer fitted with an air bearing and a defined-shear geometry, such as a cone and plate measuring system, permits the measurement of the viscosity of eye drop formulations across the enormous but shear rate range of relevance.

Figure 1 shows the results of shear rate sweep viscosity profiles performed on the samples. Shear rate was swept from 1 1/s up to 50000 1/s in a single sweep, a feat that only an advanced rheometer can accomplish. All the samples except the low cost product exhibit significant non-Newtonian, shear thinning behaviour, with Newtonian plateaus being clearly evident as shear rate tends to zero. However, the quantified zero-shear viscosities cover an enormous range, from around 2.62mPa.s for the low cost product to a whopping 73.5mPas for super-lubricant A.

At the other end of the scale, where shear rates match those estimated during blink, the relative viscosities of the formulations are shifted somewhat but again, a wide range exists with the popular premium product showing the lowest viscosity at approximately 2.32mPa.s and super-lubricant A measuring 9.55mPa.s. These variations in high-shear viscosity would be expected to manifest as differences in “drag” on the eyelid sweeping across the cornea.

The results are summarised in the following table.

For a simple visual comparison the high shear and zero-shear viscosities are also mapped as follows:

Beyond viscosity, other rheological attributes play a role in the formation of a supporting liquid film that can maintain separation between approaching surfaces, such as the inside of the eyelid and the cornea. In addition to alignment under shear, polymer molecules in solution will also undergo straightening and stretching. This leads to the appearance of elastic effects that raise extensional (stretching) viscosity and subsequently promote film formation.  The viscoelastic behaviours that result can be identified and quantified in a number of ways using a research rheometer, one of which is to quantify the generation of normal stresses.

When an elastic fluid is sheared, a stress is generated normal (i.e. perpendicular) to the direction of shear. On a rheometer these forces can be measured through a transducer.  A correlation is often seen between the increase in normal force generation across a range of shear rates and the film-forming ability of an elastic liquid. Furthermore, a liquid that exhibits good film-forming and a low viscosity under high shear tends to possess a slippery glide quality that makes for very good lubrication: the good film-forming maintaining surface separation and the low shear viscosity allowing those surfaces to move easily relative to each other.

Normal force dependence on shear was evaluated for the samples using a custom-designed method and protocol. The results are also summarized in table 1 and graphed below:

This test differentiates the samples into two groups. The low-cost and premium products showing a markedly-lower normal force growth than the “super-lubricants”.

We use cookies to ensure that we give you the best experience on our website. If you continue to use this site we will assume that you are happy with it.OkPrivacy policy