Viscosity, rheology and surface measurements are vital to the performance of any pressure sensitive adhesive. The stakes for getting these properties wrong are higher in a medicated transdermal patch than in other systems, where keeping the patch affixed – and to the right person – can literally be a matter of life or death.

Discuss a comprehensive physical characterisation of your pressure sensitive products.

The rheological properties of adhesives are vital to their performance, and there are few situations in which the correct and balanced performance of an adhesive is as important as it is with a dermal patch. The pressure sensitive adhesive is required to achieve a number of difficult but vital properties. First and foremost, the adhesive must be… adhesive. It has to stick well enough to both the skin and the backing layer that the patch does not fall off during wear. However, the adhesive must also perform as a dispersing agent for the active ingredient, be it as a direct carrier in the case of single layer drug in adhesive patches or as a distributor in the case of matrix or reservoir style patches. Finally, the flow properties of the adhesive much be such that there is no “seepage”. The glue must stay under the area of the backing to prevent changes to the absorption area, or absorption by other people.

Tack versus Peel: A Matter of Time

An adhesive patch needs to stick, but it needs to stick just enough. An adhesive that doesn’t stick enough will fall off, which can be dangerous for the patient and non-patients alike. A patch that sticks too well (while much better than one that does not stick at all) will be uncomfortable or even painful to remove. The adhesive in a dermal patch has to do more than a regular adhesive however. It needs to act as a carrier and dispensing mechanism for the active ingredient, and those properties can get in the way of adhesion. There are three areas of adhesion during which a transdermal patch can fail:

“The composition and relevant characteristics of excipient mixes, e.g. adhesive solutions or suspensions, should be provided and characterised, including viscoelastic properties”

-From the European Medicines Agency “Guideline on quality of transdermal patches”

While viscosity plays a part in adhesion, oscillatory measurements “wobble” an adhesive back and forth, looking for a more delicate structure that is particularly relevant to a pressure sensitive adhesive. Once applied, the adhesive is much more likely to experience these gentle forces as the patch is rubbed or bumped. Due to the viscoelastic properties inherent to a pressure sensitive adhesive, oscillatory testing is vital to understanding their behaviour and performance. This testing can also generate other vital information, such as zero-shear viscosity, by making use of a Cox Merz transformation. 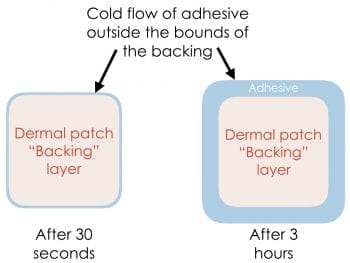 Cold flow describes creeping flow of a material. This behaviour is particularly pertinent to transdermal patch adhesives. An adhesive with a large cold flow will “spread out” over time, leading to altered contact area over which the drug can be absorbed by the patient. It is also possible that the area of adhesive exceeds the area of the backing, allowing for the drug to be transmitted to people it is not intended for.

Cold flow can also lead to the adhesive sticking to the packaging when stored over time, posing a further potential to change the end users dosage. This cold flow behaviour can be measured with a variety of methods, from traditional creep testing, to a combination of zero-shear (viscosity of the adhesive at very low shear forces) and yield stress (force required to cause the adhesive to flow) measurements. Analysing the cold flow properties of your transdermal adhesive should be a priority for ensuring your active ingredient gets to your patient – and just your patient – at the correct time in the correct dosage.

Creating a Well-Rounded Characterisation of Your Transdermal Patch Adhesive

A transdermal patch needs to stick really well, but be easy to remove. It needs to allow a drug to pass through it at a controlled rate, and not spread outside the bounds of its backing. Creating a safe and effective dermal patch can be a balancing act, combining a multitude of different properties. Profiling the rheology of your transdermal patch adhesive gives you the best start at formulation, a starting point for troubleshooting and a head start on regulatory assessments.

Let us know how we can help you characterise your transdermal patches.