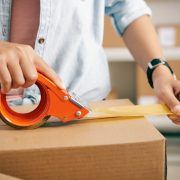 Investigating the rheology of adhesives can help manufacturers and customers alike better understand how to pick and choose the best adhesives for their application.

Peel, tack and grab, shear/creep resistance and elasticity can be explored and quantified using an appropriate toolkit of rheological techniques.

We offer flexibility in testing, training, and consulting on the rheology of adhesives. If you’d like to arrange a discussion with our experts, please feel welcome to contact our technical team, arrange a tour of the lab and get the help you need.

Contact our lab to learn about our testing, training, and consulting services for the adhesives industry

Jump to the relevant bits:

Adhesives are used across multiple industries to bond two substrates together permanently or over a targeted time frame. These come in various forms, from bandage adhesives that attach sterile coverings to skin until a wound is healed to carpenter’s glue used to bond wood together to multi-functional adhesives that simultaneously join two substrates and act to seal and protect the join from environmental damage.

Therefore, it is vital to quantify and compare the performance of adhesives to ensure that they are suitable for their intended application and behave as expected under typical use conditions. Rheology testing of adhesives is a staple for formulators and engineers looking to understand adhesive behaviour and best identify features and traits that benefit their application.

Viscosity tests are often the only type of rheological test within reach for many adhesives manufacturers looking to understand the performance of their adhesives. Solution viscosity and melt viscosity are two standard metrics used within the adhesives industry. Viscosity determines how the material handles and its long-term stability– with higher viscosity materials being more difficult to pump, spray, mix or apply and low viscosity materials being more prone to phase separation and sedimentation.

Non-Newtonian adhesives can lead a ‘double-life of viscosity, changing their handling behaviour based on the shear they are subjected to. Generally, shear-thinning non-Newtonian behaviour is most common, with samples displaying a high viscosity under low shear (such as when under storage) and a low viscosity during high shear (such as when being pumped, coated, or sprayed). Shear rate sweeps are the most helpful test when understanding handling behaviour from pumping, mixing, and coating.

Oscillatory testing is a staple of the adhesive rheology lab, helping to provide detailed information about the structural properties of a material in a minimally disruptive fashion. Oscillatory testing can be thought of as a form of mechanical spectroscopy that involves applying small amplitude oscillatory deformations to a sample and measuring the stress responses i.e., gently wobbling the sample and seeing how much it resists being deformed.

Oscillatory testing can be performed in several different ways providing key metrics such as:

Dynamic time sweeps or oscillatory time sweeps are used to track the development of structural properties in adhesives over time. They are popular for adhesives that cure or harden over time. The hardening of an adhesive can be due to chemical changes ongoing within the material, loss of solvent or cooling down over time. Some adhesives can be prone to shrinking during this period of hardening, reducing performance effectiveness – we can track the change in axial force or the change in the gap over time as the material hardens, giving an indication of shrinkage throughout the cure period. 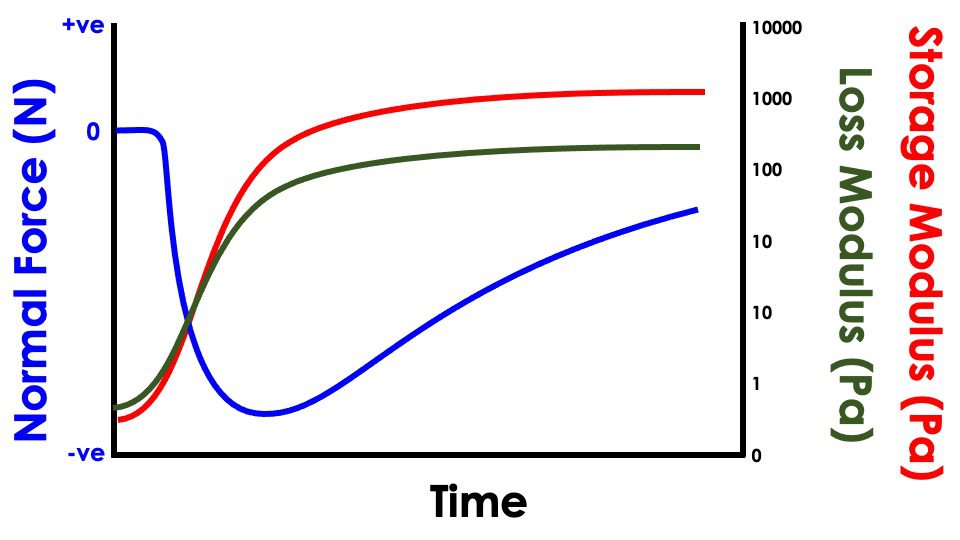 Dynamic temperature ramps or oscillatory temperature ramps are arguably one of the most valuable tests to perform when characterising the physical properties of an adhesive. The test is relatively simple and involves tracking changes in structure as a function of temperature. 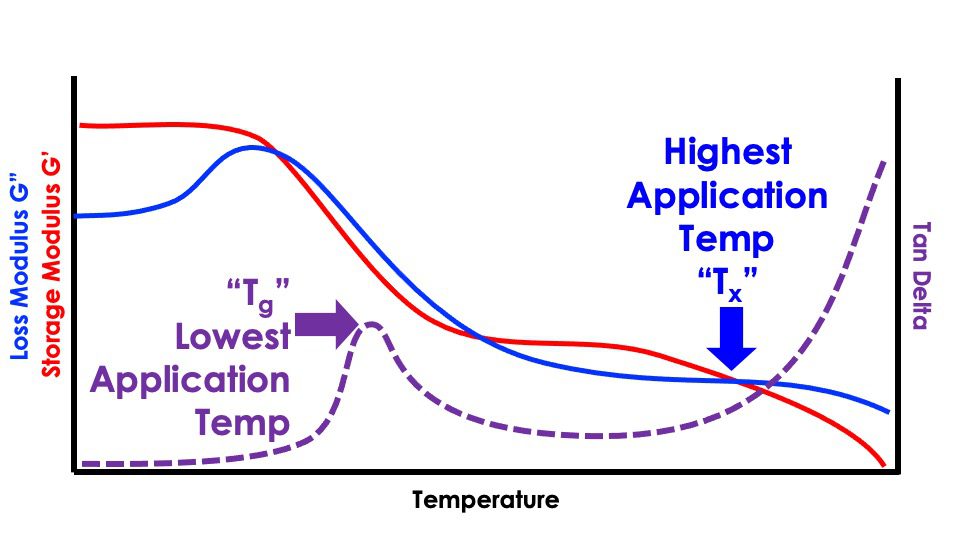 A plot of storage modulus, loss modulus and tan delta as a function of increasing temperature.

The glass transition (Tg)of an adhesive, taken as the peak of tan delta in the plot above, indicates a structural change in the material as it transitions from a hard, brittle and ‘glassy’ material to a soft, rubbery one. In the context of pressure-sensitive adhesives, the glass transition indicates typically the lowest application temperature of the adhesive.

Towards the right-hand side of the plot, looking at the last modulus crossover point, we can see that G” is above G’ indicating the material is in a fluid dominant viscoelastic state. Above this point, the adhesive is more likely to flow like a liquid and, consequently, have a lower cohesive strength.

The glass transition, Tg, and the last crossover point, Tx, indicate the minimum and maximum limits of the adhesive’s application temperature, respectively.

The shape of a dynamic temperature sweep can be used to compare several molecular structural properties. A shorter rubbery plateau region for G* will indicate that the adhesive is likely to have a lower molecular weight than the benchmark.

Finally, if the polymer adhesive is crosslinked, the entirety of the curve may be shifted upwards, displaying a higher shear modulus across the range of temperature investigated. 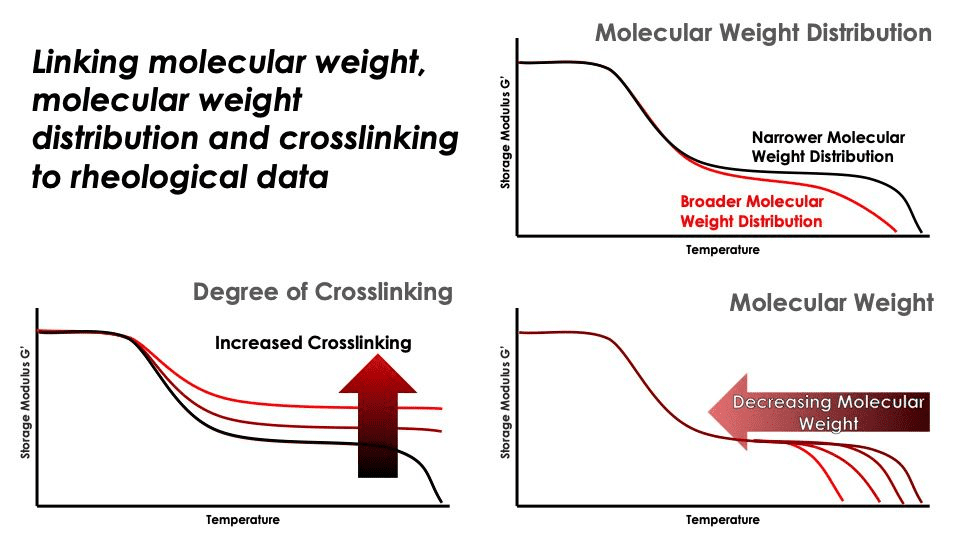 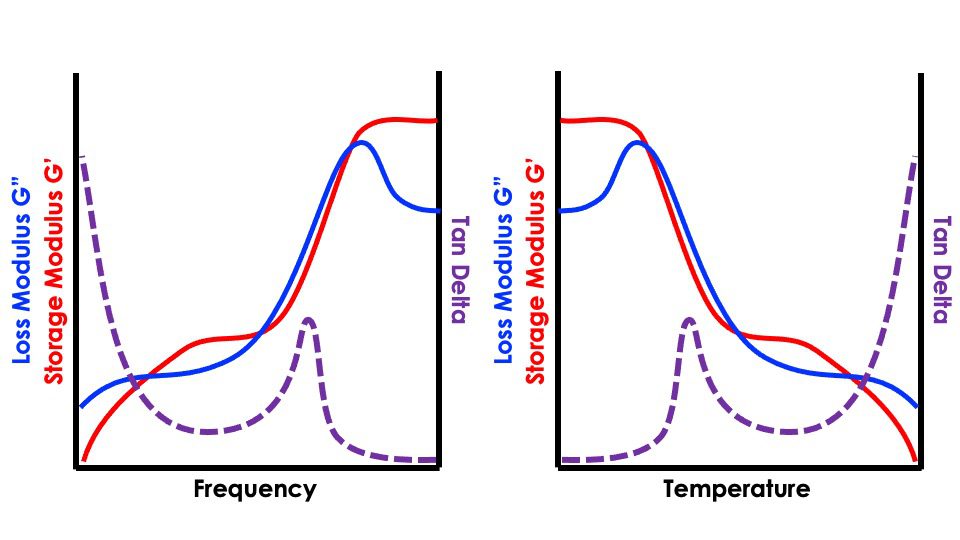 Creep tests involve subjecting a sample to a small, instantaneous, and constant stress, tracking change in strain over time. Creep tests are beneficial for quantifying cold flow behaviour and shear compliance (strain divided by stress, or the reciprocal of the shear modulus).

The time-temperature superposition principle can also be applied to a creep test to predict behaviour over a very long period (months or even years). A one-hour test can potentially be used to predict cold flow behaviour that occurs over a period of two weeks!

Axial tests are common within the industry regardless of the company’s size and are generally direct measurements of the forces required to separate two substrates bonded with an adhesive. Tackiness is generally described as the speed at which an adhesive can form a bond to a substrate – a tackier material will adhere faster than a less tacky one. Peel is a measure of the overall strength of the bond between the substrate and adhesive, with high peel strength adhesives requiring a more significant force to separate than a low peel strength adhesive.

ASTM D2979 is a standard test for measuring the pressure-sensitive tack of adhesives using an inverted probe. A small probe (8mm in diameter) is introduced to an adhesive and pressed into the substrate for a time before being separated at a set speed. 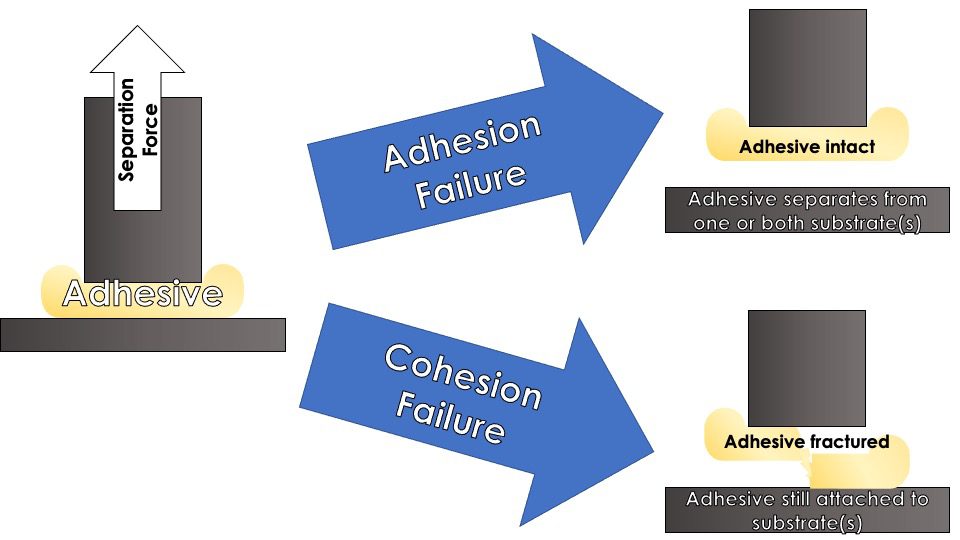 Unfortunately, these tests can be prone to user and environmental errors hampering repeatability and reliability. For similar formulations, it may be not easy to detect differences without vast amounts of testing.

Your partner in the rheological characterisation of adhesives

Whether working with pressure-sensitive adhesives, hot melt adhesives or multiple component adhesives our lab is familiar with a variety of rheological methods for characterisation and can help you derive the most value from the results. Contact us now to arrange a virtual tour of the laboratory and kick-start the discussion on how we can contribute to improving and optimising the performance of your adhesive products.