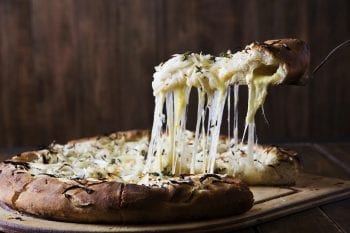 Rheology is a powerful technique for probing the behavioural profile of materials over a range of temperatures. Parameters such as rigidity and the degree of melting can be determined, providing key insights into behaviours at elevated temperatures. One area where this is especially useful is in the comparison of the melt profiles of plant-based cheeses both with each other, and with their dairy-based counterparts. This case-study showcases how these differences can be measured using rheology and uses Principal Components Analysis (PCA) to further exemplify differences between samples.

Although plant-based margarines are commonplace in supermarkets, other plant-based dairy products have been less forthcoming. However, in recent years there has been significant interest in the development of plant-based versions of other dairy products. For example, since the mid-2000s there has been an explosion in the range and main-stream availability of plant-based milks, cheeses and ice cream. This is likely to have been a market-driven change as consumers have become more environmentally aware and an increasing proportion of people follow a vegan diet. Although switching from dairy-based to plant-based formulations sounds simple in principle, in practice developing a plant-based product with comparable characteristics to the dairy-based original is fraught with difficulty. 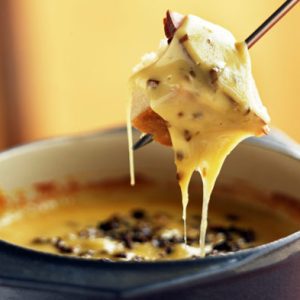 For example, reproducing mouth-feel and physical behaviours in cheese products is often challenging. A significant issue with many of the early plant-based cheese products was that they had a waxy, chalky or plastic-like texture. Although many of these issues have been solved with modern formulations, one difficulty that still needs to be overcome is recreating the melting profile of a ‘traditional’ diary cheese with a plant-based formulation. Rheology can be a useful tool for comparing and benchmarking different products against each other and can reveal how behaviours change over a range of temperatures.

We used rheology to probe the melt behaviour of 6 dairy-based and 6 plant-based/vegan cheese products. This allowed us to monitor the solid to liquid behaviour during melting, and the rigidity of the samples as the temperature changed. 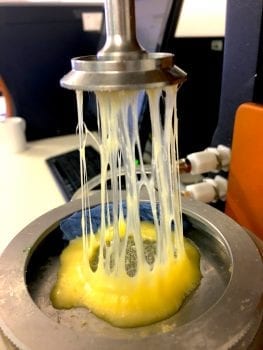 Phase angle data, collected using an oscillatory stress sweep, can provide information about the state of the material under different stresses and reveal how products change behaviour between solid and liquid-dominance under different temperature regimes. A phase angle below 45° shows solid dominance, and above 45° shows liquid dominance. Please see this article for further information about phase angle.

With the samples of cheese in this study, there were clear differences between the dairy and plant-based cheeses’ solid and liquid behaviours as temperature changed, Figure 1. For example, at lower temperatures the dairy-based cheeses had a similar phase angle (~25°) indicating solid-dominance. The comparative outlier was cheddar, with a phase angle of ~30°. With the dairy-based cheeses, as the temperature rose the phase angle increased, showing a transition to liquid-dominance that can be attributed to melting behaviour. The rate of change varied between cheese samples, with the mozzarella block showing the fastest transition and finishing as the ‘most liquid’ with a phase angle of ~70°. Interestingly, shredded mozzarella showed different behaviour to the block of mozzarella, with a final phase angle of ~50°. Emmental and Jarlsberg also had a final phase angle to 50°, showing that they did not melt to the same extent as the other samples and still remained fairly rigid.

Comparatively, the plant-based cheeses showed very little in terms of behavioural change over the temperature regime tested, with no plant-based cheese exhibiting behaviour that indicted melting. In fact, in all cases the ‘degree’ of solidity was either maintained increased. Of all the vegan cheese tested, Vegan C was the least solid (phase angle ~34°) with the other samples mostly exhibiting a phase angle between 23 and 28°. The outlier was Vegan F, which was considerably more rigid than the other cheeses (phase angle ~11°).

Principal Components Analysis (PCA) is a powerful technique that allows for comparison of large data sets in a visually simple way. One of the advantages of PCA is that strong patterns and variations can be quickly identified. When PCA is applied to the data collected for the cheese samples it can quickly be seen that the dairy cheeses and vegan cheeses show different behaviours, and none of the plant-based cheeses occupy the same space as the dairy cheeses, Figure 3. This allows for the quick identification of Vegan F as an outlier when compared to the other vegan cheeses, and a significant outlier when compared to the dairy-based cheeses.

In summary, rheology has been used to probe differences between the melt profiles of plant-based and dairy-based cheeses and has revealed some interesting behaviours. This work will likely be of interest to formulators and innovators who are working to develop plant-based products that should ideally mirror the behaviours of the original dairy-based product.

For further information about this testing, and other testing regimes that we offer, please get in touch!