A creep test is used for describing the slow steady flow of a material under low stress conditions and is commonly requested for identifying important material properties such as zero shear viscosity and specific viscoelastic properties.

Need to have a creep test performed but lack the equipment or knowhow?

Some of the most common applications for creep testing include:

What is a Creep Test?

Simply put, a creep test helps understand two situations: the degree of elastic deformation and and rate of viscous flow on the application of a small (i.e. below any yield point) shear stress to a material and the total recoverable elastic deformation on the removal of that stress.

A creep test takes into consideration responses to the application and/or removal of a constant defined shear stress by measuring shear strain over time.

There are two primary pieces of information generated by a creep test:

Understanding the Results of a Creep Test

A creep test is plotted as a function of either strain, or more often compliance, against time. Strain can be described as the deformation of material resulting from applied stress. Compliance is the ratio of observed strain to stress applied. Plotting the data as a function of compliance allows for multiple data sets resulting from varying stresses to be plotted together. 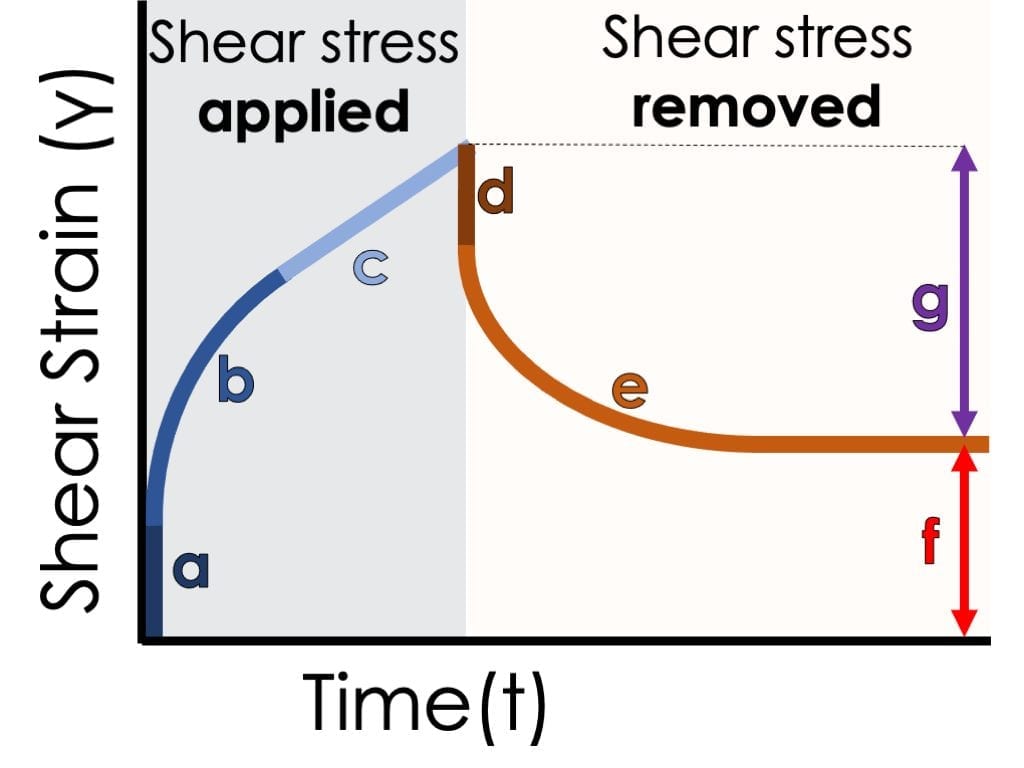 The first part of a creep curve can be divided into three regions; Instantaneous elastic response (a), viscously-retarded elastic deformation (b), and steady-state viscous flow (c). Once the relaxation stage has started, (d) relates directly to (a) and (e) to (b). (f) represents irrecoverable, viscous deformation of the material, and (g) the recoverable, elastic deformation. Each of these areas relates to a specific property of the material being tested:

The second part of the creep curve occurs once the viscous steady state flow has been achieved, and is induced by removing the stress from the material. This results in two further parts to the graph;

Of course, all of this is as observed in a perfect creep flow curve, something very rarely encountered in practice. Interpreting and understanding the practical elements of a creep flow test is often much more complicated.

If you wanted to discuss creep testing in more detail, please feel welcome to contact us.