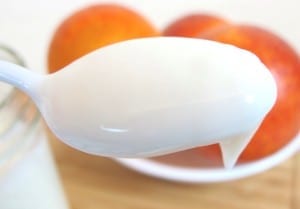 The creamy, silky luxury delivered by a full fat yoghurt can now be captured and quantified by our triborheological characterisations and, for the three products we analysed, the marked difference in thickness and lubricating qualities when compared to a zero fat version is thrown into sharp relief.

We tested two yoghurts carrying a branding of luxury and decadence – one containing 3% fat and one 6% – and compared them to a 0% fat alternative.

Tribology is the study of friction and lubrication. The lubrication offered by fats and oils in the mouth is one of the main cues for a “full fat feel” and the recreation of this lubrication is a major aim for innovators of low-fat and no-fat alternatives. To perform a tribology test the product of interest is applied onto two surfaces, typically one soft and one hard, that are then rubbed together under defined gentle pressure and across a range of sliding speeds to simulate, for example, the contact between the tongue and palate during oral processing of foods and beverages.

The graphic below details a common representation of tribology results for the three yoghurts, “Stribeck curves”: plots of coefficient of friction against sliding speed: 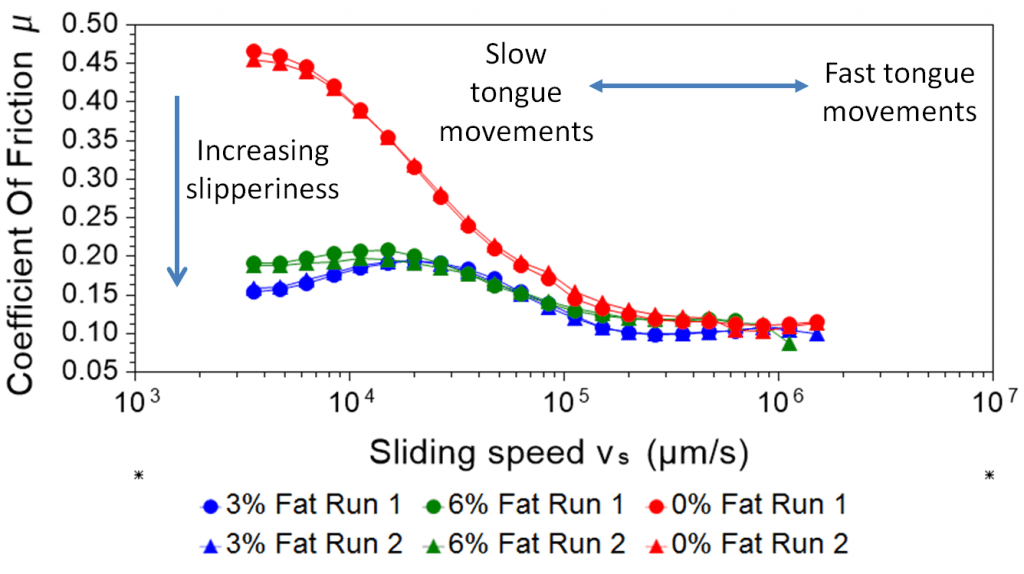 The difference between the high friction zero-fat product and the smooth slipperiness of the high fat products is all too obvious, particularly at lower sliding speeds. It is interesting to note that the results converge greatly, but only at higher sliding speeds, suggesting that the tribological contribution to mouthfeel may be similar throughout early stages of processing of a spoonful of yoghurt where deliberate and higher speed tongue movements persist, but that the low speed “residual” movements associated with the registration of after-feel may reveal a huge dissimilarity between the zero fat and high fat products.

Rheology, the study of the flow and deformation of matter, enables us to profile the flow behaviour of a product. Early in the oral processing of a spoonful of yoghurt (remembering the whole process may only last a few seconds) the product remains in a thick layer held between the tongue and palate. Texture in this “thick layer” scenario is dominated by rheological contributions, a simple one of which is viscosity. The graphic below shows the comparison of viscosities of the three yoghurts across a range of shear conditions. 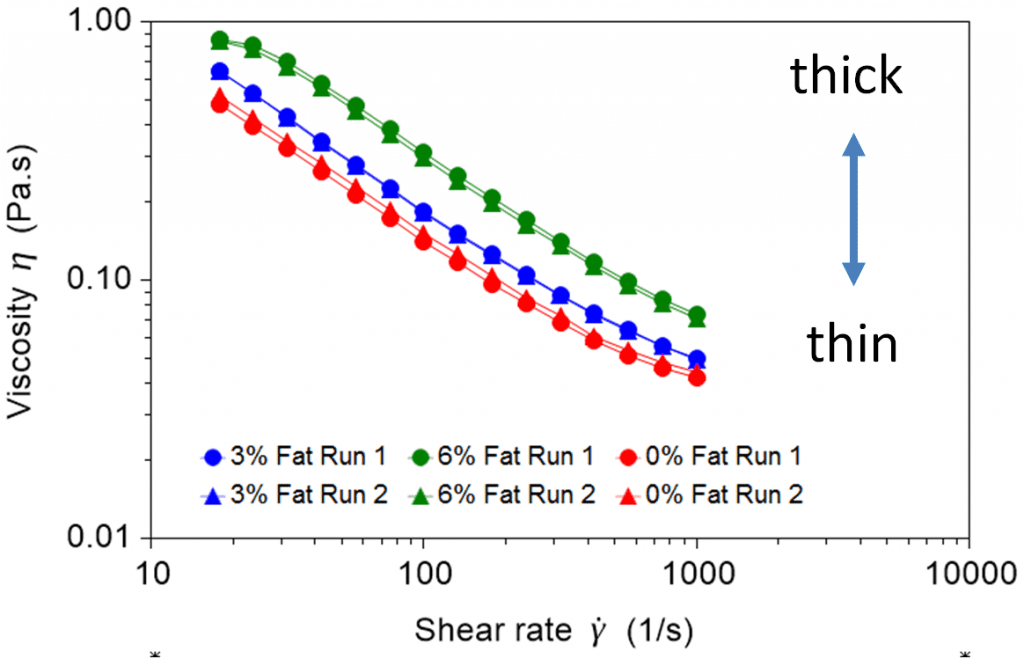 Again the differentiation between the samples is highly evident: the 6% fat yoghurt shows viscosity around 70% higher than the 3% yoghurt and double that of the zero-fat version. Such differences are expected to manifest as markedly varying handling qualities, both on a spoon and in the mouth.

Found our study interesting, or have a question you wanted to ask? Let us know.