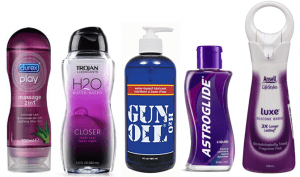 lubricants are no longer the thing of rubber-gloved gynecologists or over-priced marital therapists and in recent years their uptake for recreational use has exploded with a bewildering variety of products hitting the shelves.

There can’t be many topicals on the market for which the sensory aspects of application and use are more crucial. With the health and happiness of couples the world over in our hands, we decided to perform some rheology and bio-tribology measurements on three popular products to identify those attributes most likely to create mind-blowing moments in the bedroom.

Rheology and Tribology: A Marriage Made in Heaven

Rheology studies the flow and deformation of films of materials separating surfaces in relative motion. Tribology, on the other hand, is the study of the friction, lubrication and wear of interacting surfaces – in other words, surfaces in close contact. The term bio-tribology relates specifically to the interaction of soft, biological surfaces. 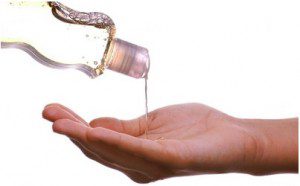 For thick films, rheology dominates the handling and spreading characteristics, whereas for thin films, tribology takes over, influencing slipperiness and friction reduction. The spreading of any topical product onto the skin involves the progressive decrease of its film thickness throughout the application process. In fact this time-dependent transition from a thicker to thinner film occurs in many cases where biological surfaces interact, also occurring, for example, during oral processing of foods and beverages. Rheological profiling can therefore illuminate the early stages of the material usage (pouring, handling and first touch) and tribology can inform us on the latter stages (spreading, massage and intercourse).

The rheological behaviours of interest for personal lubricants are low shear viscosity for handling and application and high shear viscosity and elasticity for in-use lubrication.

What follows are the results of a short tribo-rheology study of three popular lubricants. The products chosen have been described as follows:

The study focused on three behaviours: viscosity under shear, elasticity under shear and frictional force over varied sliding speeds. The results demonstrate that the three products display widely-differing rheology and tribology characteristics, all achieving the desired results for their users in different ways.

Figure 1 demonstrates that all three products show very different viscosity behaviour across a range of shear rates. Viscosity at low shear relates to pouring and handling, a lower viscosity product proving easier to pour and having a lighter initial touch and feel. Viscosity at high shear will influence skin feel on application and throughout usage. 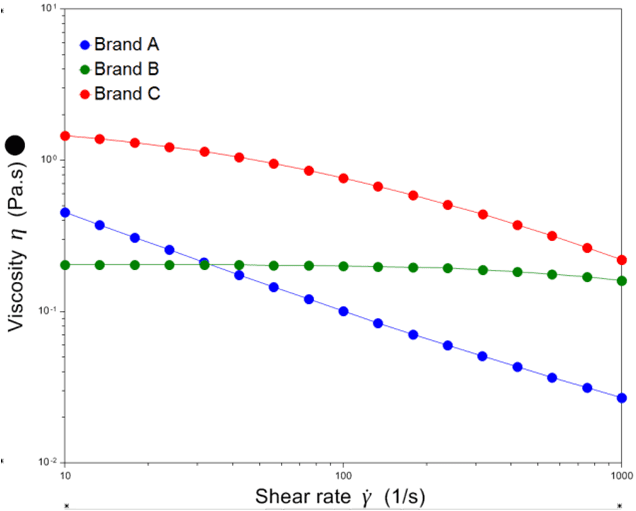 With the application of shear elastic liquids often generate normal stress – stress perpendicular to the direction of shearing – resulting from reaction forces from stretching and straightening of linear polymer chains in solution. Knowledge of normal stress generation, combined with shear viscosity data, can inform us about expected rheological behaviour conducive to the formation of a stable lubricating film between surfaces. We can see in Figure 2 the significant difference between the highly-elastic Brands A and C generating large normal stresses compared to the relatively inelastic Brand B. 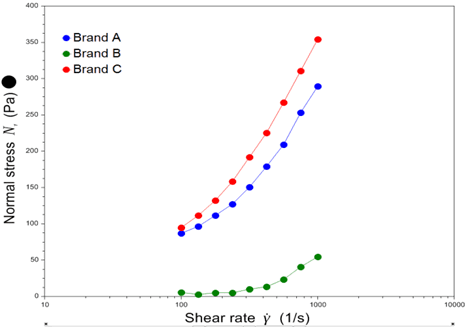 As surfaces in relative motion progressively squeeze out the liquid layer separating them those surfaces become interacting and we enter a tribological regime where the nature of the lubrication depends upon the magnitude of squeeze forces (the load) and the sliding speed. At high sliding speeds and light loads a separating film is generated by hydrodynamic lift – aquaplaning, in other words. However, when the squeeze is on and the speed is slow, boundary lubrication is in effect, where opposing surface asperities (the tiny peaks and troughs that create roughness) come into appreciable contact, and friction rises.

Fig 3: Lubrication regimes depend on the separation of surfaces.

Tribology testing often involves the generation of Stribeck curves similar to those shown in figure 4. In this study the lubricants were tested between a hard and soft surface under a defined load, with frictional force plotted over a range of sliding speeds. 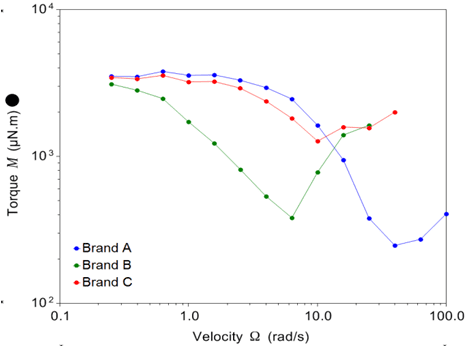 The relative magnitude of frictional forces throughout the boundary region, the position of minima and the growth of friction in the elastohydrodynamic regime all dictate the lubrication profile of a product.

This short study has revealed that, driven by personal preferences, broad differences exist between equally-successful lubricant brands. Rheology and tribology properties work together to create the richly-nuanced set of characteristics the enlightened formulator can optimise to achieve great textures and sensory experiences for the users of their products.