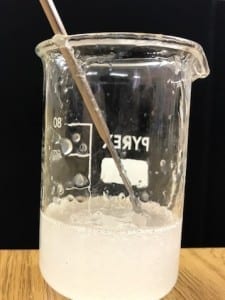 Rheological profiling offers an unparalleled insight into the sensory, handling, stability and appearance characteristics of starch-based products. These insights are rapidly gaining the status of need-to-know information for product developers, process engineers and quality controllers needing to deliver winning products to a discerning public. Where rheological testing excels is in the analysis of gelatinized starches and starch-thickened formulations, delivering an easy-to-interpret yet revealing picture of product attributes that is not available from more established methods such as starch pasting viscometers.

Starch functions by building highly delicate structures in a formulation or recipe. It is the presence of such structures that imparts sensory, texture, handling, suspending and appearance attributes to a formulation. Such structures necessitate equally soft and delicate measurement methods where the structure is gently stressed or deformed and its response is monitored (Contrast this to the relative wrecking ball of a rapidly-rotating paddle of a visco-analyzer or a spinning viscometer spindle, demolishing the very network interactions we need to characterize.) Rheological testing techniques are unique in that, in addition to viscosity, they directly measure strength, rigidity, brittleness and a host of other attributes that describe these characteristics.

Rigidity vs. Strength, what’s the difference?

Rigid structures manifest as stiff products, soft structures as wobbly and gelatinous. Strong structures can maintain a suspension whilst weak structures pour easily. In the rheology world rigidity is termed modulus and strength is yield stress. Beaten egg whites and whipped cream create stiff but weak structures while jelly displays a soft (i.e. wobbly) but strong structure. Gummy bears are both rigid and strong and chilli dipping sauce is soft and weak.

Oscillatory stress sweeps are a great way to obtain a simple quantification of modulus and yield stress. The test involves applying small but incrementing oscillating (clockwise then counter-clockwise in rotation) stresses to a sample whilst monitoring its resulting strain (i.e. deformation) response. Modulus is obtained from the ratio of applied stress amplitude to resulting strain amplitude. The graphic below shows the result of oscillation stress sweeps performed on a variety of freshly gelatinized cook-up starch gels (5g/100ml water) at 60°. All the starches display complex modulus plateaus at low stresses, yielding as the incrementing applied stress disrupts structure.

An interesting nuance can be seen in the complex modulus behaviours for the dent maize and potato starches where, despite similar rigidities, the dent maize displays a more pronounced “snap” as the yield is reached whereas the potato starch gel shows a more gradual yielding. These differences would manifest as differences in “cuttability”, the catastrophic yield of the dent maize correlating with a more cuttable texture.

Viscosity profiling across a range of defined shear rates demonstrates the continuing divergent behaviours of potato and dent maize starch gels beyond the yield point with the former manifesting viscosities at least five times greater than the latter over the range of shear rates tested. This would be expected to result in a heavier mouth feel in the potato starch.

Yet more information can be gained from an analysis of the generation of normal stresses with increasing shear rate. Normal stresses are stresses generated perpendicular to the direction of shearing (hence “normal”) when an elastic liquid is sheared. A gel that generates high normal stresses tends to display greater degrees of stringiness and sliminess, film-forming and lubricity.

Notice the pronounced difference across the four gels with the long-textured potato starch gel generating normal stresses many times greater than the other much shorter-textured samples.

We have shown how the gentle touch of rheology profiling can capture and quantify nuanced behaviours that are picked up by the consumer yet are completely missed by the veritable hatchet job performed by viscometers and visco-analyzers. With the advent of ultra-sensitive research rheometers running sophisticated oscillatory and viscoelastic analyses, a world of hitherto hidden structure is revealed to the product developer, process designer and quality assurance technician.