Increasing the zero-shear viscosity of the continuous phase of an emulsion or suspension is a popular method of increasing physical stability. However, zero-shear viscosity measurements are outside of the capability of most typical laboratory viscometers as they lack the sensitivity and precision motor control necessary to perform such tests. High performance rheometers such as those in our lab are able to perform very gentle controlled stress viscosity profiling methods to obtain zero-shear viscosity values on a range of materials.

The Stokes equation provides an estimate, in a highly simplified situation, for the sedimentation or creaming velocity of solid particles or liquid droplets dispersed in a liquid continuous phase:

It can be seen here that to ensure maximum stability particle size must be reduced or continuous phase viscosity increased. 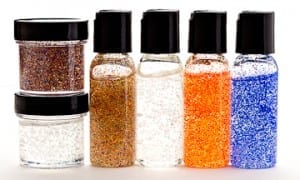 In most formulations, the continuous phase will be thickened with the addition of rheology modifiers and stabilisers such as water-soluble polymers. These work by increasing the low-shear viscosity of a liquid while leaving the high-shear behaviour relatively unchanged, thereby imparting non-Newtonian, shear-thinning behaviour. However, different rheology modifiers will impart different degrees of shear-thinning. This causes a problem for formulators looking to quantify the relative stabilising effects of rheology modifiers because the viscosity of a non-Newtonian, shear-thinning liquid is, of course, not a single number, but is dependent upon the shear applied.

Sedimentation and creaming are long, slow processes that occur in effectively at-rest conditions. As such, the viscosity value of most relevance, and the one with which the Stokes equation will deliver the most reliable estimate of sedimentation or creaming, is the zero-shear viscosity of the continuous phase, the plateau viscosity seen at very low shear rates and stresses. 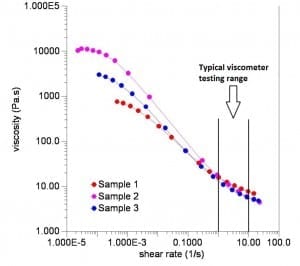 Often formulators will only have access to standard Brookfield viscometers. While being a simple, low-cost solution, the problem with using these instruments is that they typically only have a small range of measurement and, more crucially, they cannot operate at the ultra-low torque conditions necessary to measure zero-shear viscosity. According to a typical viscometer these three samples would appear to be very similar, but at very low shear rates (zero-shear viscosity) they are very different.

Zero shear viscosity testing requires the application of very low shear rates and shear stresses, necessitating high performance rheometers such as those we have here at the laboratory. If you would like any advice or assistance measuring zero-shear viscosity, or have any other suspension or emulsion questions, please contact us and we will be happy to help.