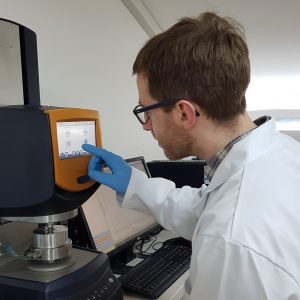 Using advanced rheological techniques, we have probed the viscoelastic properties of concentrated (300 mg/mL) bovine serum albumin (BSA) solution in deionised water and a concentrated BSA solution (300 mg/mL) in 0.5M sodium iodide (NaI), revealing significant differences in behaviour. The NaI-doped solution had significantly lower viscosity, lower zero-shear viscosity, lower yield-stress and liquid-dominant behaviour across a wider range of frequencies than the non-doped BSA solution. All these differences will likely have an impact upon the end-use of the product and are valuable considerations for Research and Development Scientists, Formulators and Innovators.

In recent years there have been large advances in the development of protein-based drugs. In particular, monoclonal antibodies are highly promising therapeutic molecules against a range of diseases including inflammatory disorders and cancers. Most monoclonal antibody therapeutics are administered as an intravenous infusion in a healthcare setting, for example a hospital. However, this is intensive upon clinicians, patients and healthcare resources, therefore developing a subcutaneous formulation would be advantageous as it affords more rapid drug delivery and requires less patient compliance. 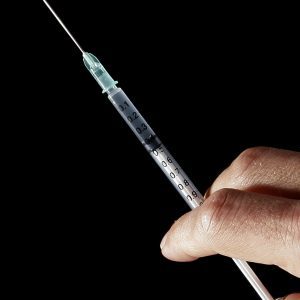 To facilitate subcutaneous delivery as a simple injection, the protein needs to be present in high concentrations of above 100 mg/mL. Formulating injections at such high protein concentrations leads to several difficulties that need to be overcome. Protein solubility notwithstanding, viscosity and aggregation of protein molecules are likely to require attention due to the increased incidence of protein–protein and protein–excipient interactions that are likely to modify the rheological properties and hence the injectability. To date, there are few monoclonal antibody formulations prepared at concentration of over 100 mg/mL due to the extreme viscosities of these solutions.

A number of academic publications by Luksic, Yin, Kalonia and Klibanov have sought to address this and often use bovine serum albumin (BSA, MW ~66,500 Da), a readily available surrogate for proteins found in injectable formulations. Current research is geared towards addition of salts to reduce viscosity below 50 cP, widely regarded as the limiting viscosity for subcutaneous injection. Basing our work on previous studies, we sought to showcase the effect of sodium iodide (NaI) on the rheological properties of BSA in aqueous media.

To this end, we prepared two bovine serum albumin solutions in deionised water. One was at a concentration of 300 mg/mL and the other was at concentration 300 mg/mL in 0.5M NaI. Five sets of data were collected: a controlled rate viscosity profile (CRVP) to determine viscosity over a range of shear rates, a controlled stress viscosity profile (CSVP) to determine zero-shear viscosity i.e. viscosity in a close to at-rest conditon, an oscillatory stress sweep (OSS) to determine yield stress, an oscillatory frequency sweep (OFS) to determine the viscoelastic fingerprint, and finally a syringability comparison to see if altering the formulation changed injection force required. These parameters are all important when elucidating a liquid’s behaviour and can have a bearing upon processing and end-use.

The CRVP shows that increasing the shear rate led to a decrease in viscosity, Figure 1. Interestingly, the BSA doped with NaI was less viscous than the non-doped solution, showing that NaI can potentially act as a viscosity-modifying agent.

Zero-shear viscosity: how do solutions behave at rest?

As noted above, both BSA solutions decreased in viscosity as the shear rate increased, tending towards coalescence of viscosity at high shear rates. Under very low shear conditions (which can act as a surrogate for zero-shear conditions) there was a substantial difference in viscosity: BSA had zero-shear viscosity of 11.12 Pa.s (11120 cP) and BSA in 0.5M NaI had zero-shear viscosity 0.24 Pa.s (240 cP), Figure 2. The real-world impact of this is that if the viscosity is not high enough sedimentation or separation may occur during storage, which may have an impact upon the stability or shelf-life.

Another complementary rheological technique that can provide valuable insight into solid-like or liquid-like behaviour of a sample is the use of oscillation. During an oscillatory test, the sample is wobbled gently to probe for any structure present. This is important because some materials can exhibit liquid-like or solid-like characteristics depending upon the conditions. Changing the stress, frequency, strain or temperature can all have an impact upon the solid-like or liquid-like behaviour of a material, which can have a knock-on impact for a material’s properties or the processing parameters.

An oscillatory stress sweep (OSS) is when the frequency at which the sample is oscillated is kept constant, but the stress placed upon the sample is varied. During an OSS the storage and loss moduli can be determined, as well as the complex modulus and tan δ (phase angle). Storage modulus and loss modulus can be thought of as representing, respectively, the energy stored through elastic deformation or dissipated through viscous flow. In a material with solid-like properties the storage modulus is larger than the loss modulus but placing an external stimulus on the sample, for example by changing the oscillation stress, can lead to an inversion of the storage and loss moduli and allow for calculation of parameters such as the yield stress or glass transition temperature, Tg, in the case of polymers. During this testing the frequency was maintained at 1 Hz.

Performing an OSS on both BSA solutions showed some interesting differences. Firstly, BSA had significantly higher storage and loss moduli, therefore a higher complex modulus overall, so was more rigid than BSA with 0.5M NaI at rest, Figure 3. The complex modulus also allows for identification of the viscoelastic region, i.e. the region where the sample can be oscillated but the structure is not destroyed. Any oscillation stress above this window leads to structural breakdown and the material’s properties change.

Secondly, the difference between storage and loss modulus in the BSA sample was larger than in the BSA with 0.5M NaI sample, showing that the BSA sample was more ‘solid-like’ whereas the storage and loss moduli upon the addition of 0.5M NaI were more similar, so the material was comparatively less solid-like, Figure 4. The point at which the moduli cross-over can be used as a measure of yield stress i.e. how much stress is required to break-down the material and induce significant non-recoverable deformation (i.e. flow). The data clearly show that BSA has a higher oscillatory yield stress than BSA with NaI.

In real-world terms, BSA with NaI requires less force to induce movement, or flow, than BSA without NaI and has a less solid structure. The implication of this may mean that during syringing, less force would be required to effect injection of material.

The final test completed was an oscillatory frequency sweep (OFS), which can identify a viscoelastic fingerprint and pinpoint any specific behaviour e.g. viscous or elastic dominance. During this test, the strain placed upon the sample was maintained such that it fell within the linear viscoelastic region (determined in the OSS), but the frequency at which the strain was applied varied. This test is useful to scrutinise time-dependent behaviour in relation to any structural changes.

In both cases, at low angular frequency the loss modulus dominated, and the materials were both more liquid-like or ‘viscous dominant’, Figure 5. As the angular frequency increased the storage modulus also increased and eventually there was a cross-over and solid-like behaviour dominated, leading to ‘elastic-dominant’ behaviour.

The point at which this cross-over occurred was significantly different for both solutions under test, with BSA in 0.5M NaI requiring a higher angular frequency to induce this change. What these data show is that addition of NaI to BSA disrupts the structure. This is evidenced by the point at which storage modulus crosses the loss modulus (i.e. when solid-like behaviour dominates) requiring higher angular frequency. This is also reflected in the viscosity data; BSA in NaI had lower viscosity than the BSA without dopant. However, the advantage of OFS data over viscosity data alone is that OFS allows interrogation of a sample at a particular strain or within a particular point on the viscoelastic profile.

Comparing the syringability of the formulations was completed using a texture analyser from Stable Micro Systems. Samples were placed in a syringe and forced from the barrel through a 27 gauge needle at 33 μL/s. When compared to water, both samples required more force to achieve the desired syringe-rate, Figure 6. Compared with each other, BSA required more force to syringe than BSA in 0.5M NaI, which aligns with the lower viscosity of the BSA in NaI.

In summary, the use of rheology beyond simple viscosity profiling has revealed interesting behavioural and structural differences between the pure and the NaI-adulterated protein solutions:

If you are interested in any of the techniques outlined here, or would like to know more about suitable testing for your products, please call us today to arrange a discussion.