We compared the results of fat replacement strategies of two highly successful mayonnaise giants who have differed in their approach: Hellman’s have opted to thicken their mayonnaise with gums. Heinz have chosen to use mainly starch. We aim to show how rheology can accelerate re-formulation decisions by quantifying differences in texture.

To discuss this study in more detail, or talk to us about how our characterisation capabilities can assist with your work on sauces, dips, creams or in simply quantifying fat reduction performance, please feel welcome to contact us. 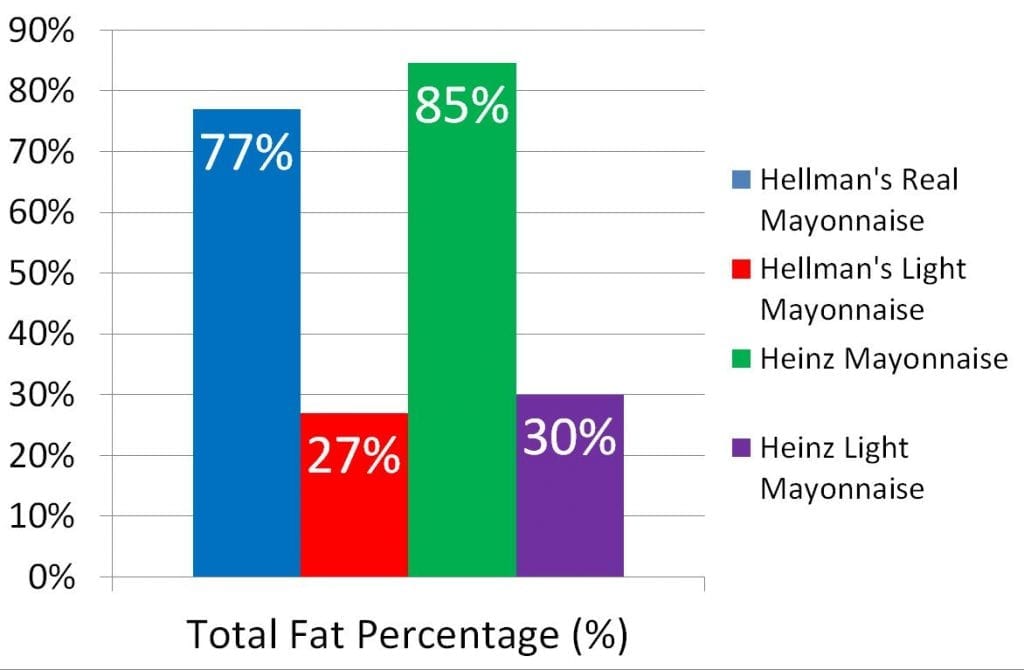 Driven by concerns over a global obesity epidemic, consumers are making conscious health choices to reduce their fat intake. Condiments, such as mayonnaise, are often the first casualties in the battle of nutrition, given their status as indulgent finishing touches to a delicious meal and of course, when you consider that mayonnaise can have a fat content around 70-85% of its total mass. So then, a demand exists for food manufacturers to provide consumers with healthier fat reduced alternatives of their favourite products.

It should come as no surprise that reducing fat from a product that is predominantly made of fats is no easy task! Especially given that fat influences some of the key quality attributes of mayonnaise; handling, taste and mouthfeel are all heavily influenced by the presence of fat. To make up for these changes in texture, food manufacturers will often add other ingredients such as starches and gums. However, not all thickeners are created equal. These differences can be immediately apparent in the final product but are often not so easy to articulate, let alone quantify.

In terms of rheological properties, a Brookfield viscometer is often the first point of call when assessing texture of semi-solids. However, many Brookfield viscometers may not be able to reach shear conditions relevant to application. Ranges of shear rates experienced in the oral cavity have been reported to range, for example, from 50-1,000s-1. 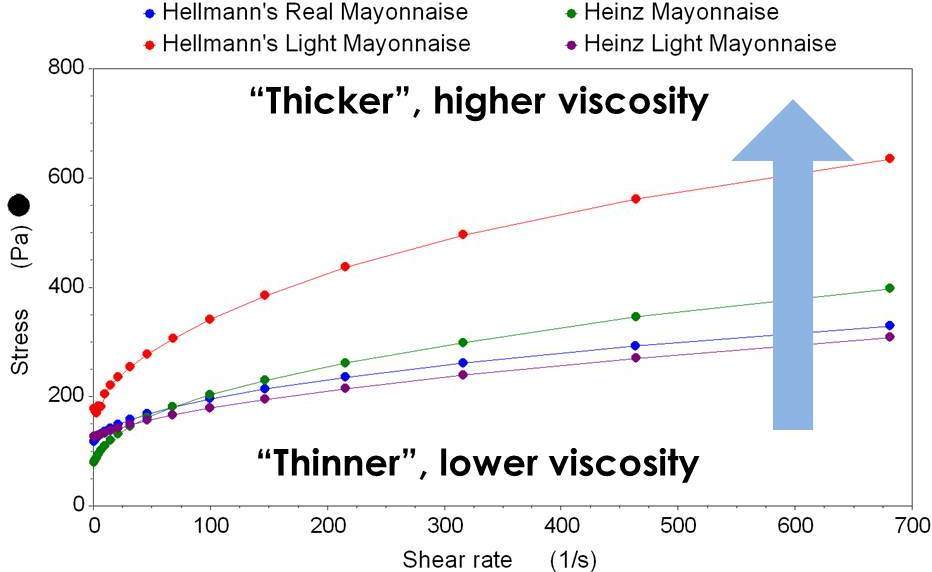 The plot above shows shear stress as a function of shear rate, or essentially how hard to push a material to maintain a flow rate. A common but noteworthy observation is that all mayonnaises shown start with a stress above zero meaning they behave as solids until the applied stress exceeds this value – this value is often called the “yield stress” or “yield value”. We like to describe materials with this characteristic as “structured liquids” – which you can think of as solids that can be made to flow.

Hellman’s low fat mayonnaise requires as much as twice the effort to get moving than its full fat counterpart across a range of shear rates. This can affect a number of properties from process-ability, delivery from a container and its mouthfeel perception during consumption. Heinz has managed a closer approximation with its low-fat product, and even has close similarities with Hellman’s full fat product.

Viscosity testing on some rheometers can also provide another useful metric worth exploring. Extensional behaviours such as stringing, swelling and tailing are generally a real pain to measure. Often many materials which display extensional behaviour also generate a “Normal” stress when sheared. I.e. an outward stress perpendicular to the direction of shear. A high rate of Normal stress growth can be a useful correlate for investigating and quantifying extensional behaviours.

It’s interesting to note that extensional viscosity promotes the formation of a fluid film layer between two interacting surfaces. This layer promotes hydrodynamic lubrication – a situation whereby reduction in drag between two surfaces is caused by complete separation by the lubricating medium (in contrast to boundary lubrication whereby two surfaces are still in contact). If controlled properly, this can be a desirable characteristic, but in the extreme can make a material seem “snotty” or “slimy”. 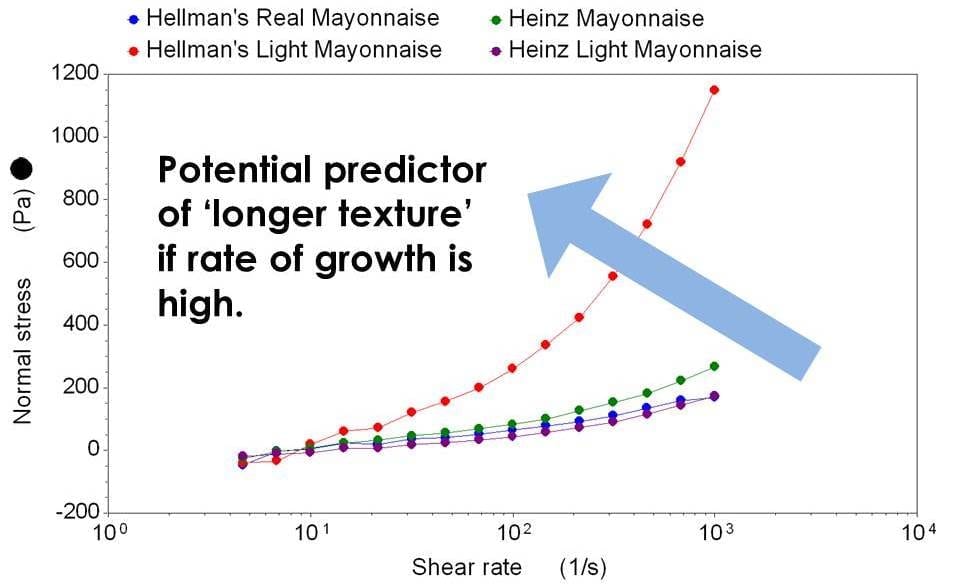 In the plot above the Hellman’s low fat mayo has a marked increase in normal stress growth, this could potentially be due to the influence of the gums used and might contribute to a “longer texture” or “stringing” of the mayonnaise. A high rate of normal stress growth is not limited to gum based products however, as some starches can also display this behaviour.

If viscosity was the only thing observed, it would be quite possible to end up with a honey-like mayonnaise. A key observation between the physical properties of honey and mayonnaise, is that mayonnaise can hold it’s shape and has a soft-solid structure. How does one measure the strength of structure without completely destroying it in the process?

In the world of rheology, the ability of a material to bounce back to its original shape is considered a property of solid materials. A stress is applied to a material, the degree of deformation or strain is measured, the stress is removed, and the ability for the material to return to its original condition is observed. This is exactly what happens with dynamic oscillatory testing – we start off by wobbling the sample with incredibly gentle stresses aimed at minimising disruption to the sample, and gradually increase the stress until we detect that the material has deformed permanently. 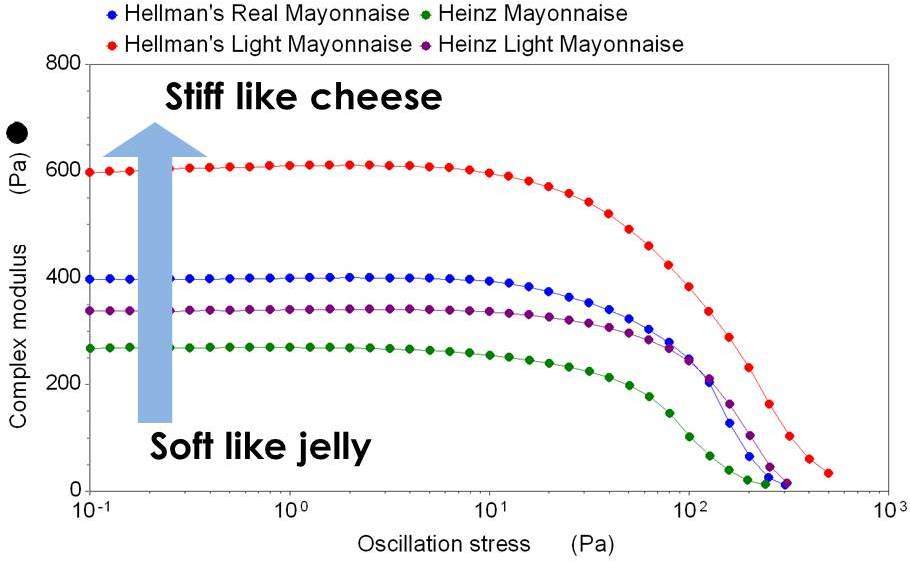 The tapering off as oscillation stress increases indicates the material yielding/permanently deforming. Hellman’s low fat mayo is the most stiff of the set and would likely form a more well defined dollop before collapsing under its own weight and turning into a conical pile. Heinz’s’ full fat mayonnaise is the most delicate so is likely to have less structural definition.

Rheology offers a rapid route to quantify key changes in material properties, combining the test data above with other observations would enable exploration and prediction of handling behaviour, appearance and even sensorial properties.

Please feel welcome to contact us, if you would like to investigate the impact of fat reduction with your products.