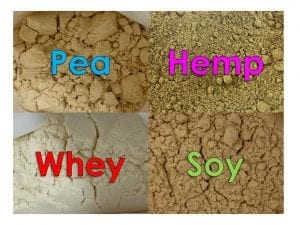 Soy, pea and hemp protein powder shakes have become popular plant-based sources for vegetarians and vegans, as an alternative to whey-based protein shakes. Despite the protein content of these powders being similar, their handling properties are quite different. Quality control processes for incoming powder typically only focus on the chemical composition. This can result in a whole host of processing nightmares downstream, as one tries to move a powder from storage and through the various stages of a production or filling line.

There are multiple contributing factors that can affect how a powder evacuates a vessel. The flow function, bulk density, compressibility/compactability of the powder, and its interaction with the surface of its container are all key considerations. These small differences can scale up drastically, as we’ll see from our comparison of protein powders below.

From a process control perspective, getting a heads up on powder handling characteristics can help avoid the dreaded hammer rash seen on hoppers, or your silo accidentally imploding on you…

Contact us now for a quick and easy characterisation of the handling behaviour of your powders. 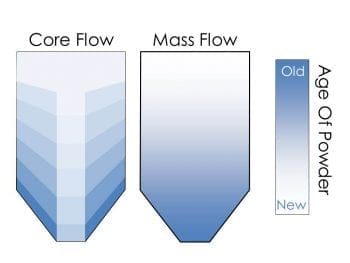 For perishable powders it is generally preferable to achieve a “mass flow” condition, whereby the first powder into the silo is the first powder to evacuate. It may not be possible to achieve this condition due to available headroom, prohibitive costs or simply because the process can’t be changed at this point. It may also not provide additional benefits where small-batch processes ensure that the powder is cleared from the system in a reasonable time frame to negate perishability issues.

“Core flow” or “funnel flow” may be adequate but can be susceptible to potential flow issues. These may be predicted and potentially avoided with a good understanding of powder handling characteristics. 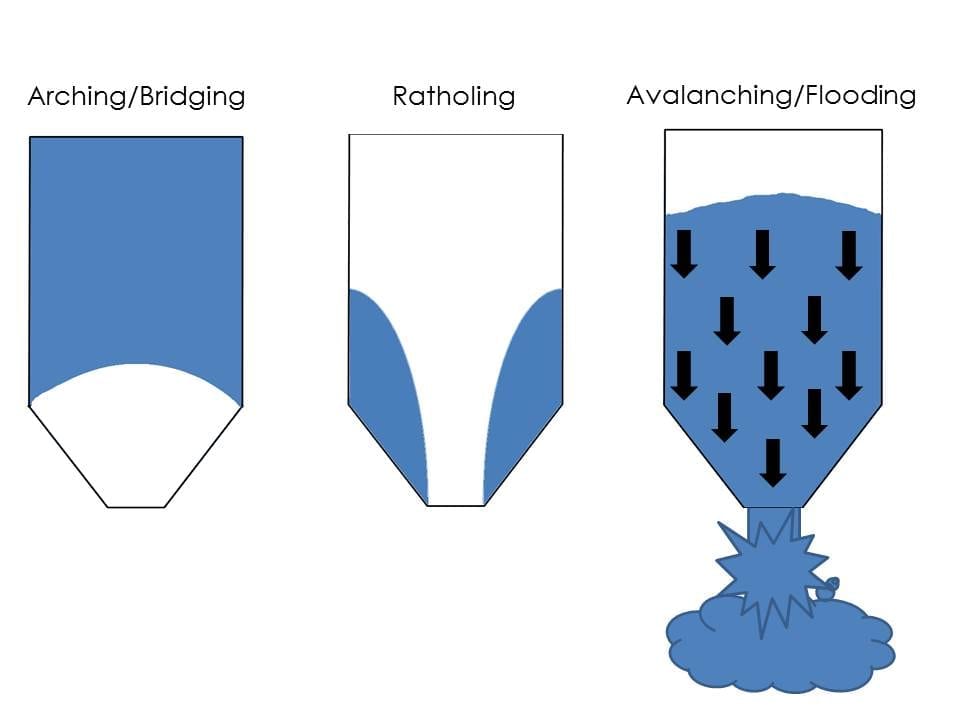 Arching or bridging is a flow-arresting situation whereby the powder mass creates a structure (such as a dome or a bridge) above the outlet hole inhibiting flow completely. Ratholing, another flow arresting situation, is when material directly above the outlet flows but the rest of the powder mass closest to the walls does not, creating a tunnel. The collapse and uncontrolled overflowing of powder can also be an issue and is sometimes referred to as avalanching.

The half-angle of hopper walls and diameter of the outlet are two physical dimensions that are normally considered when designing a powder handling system to avoid these issues. The minimum requirements for these values can be determined using the following equation.

Whereby “B” is the minimum diameter for a hopper outlet, Fc is the critical unconfined yield stress of the powder, H(θ) is a function of the geometry of the outlet, ρb is the bulk density of the powder and g is gravity. The values required to resolve this equation can be derived experimentally using the methods below.

A powder flow function is a measure of a powder’s failure strength as a function of consolidation stress. A known volume of powder has a defined consolidation stress applied to it. This attempts to simulate the stresses experienced by a powder mass at the bottom of a hopper or silo. A vaned shear cell then delicately ramps up applied shear stress until the powder mass ‘fails’ and flow is achieved. 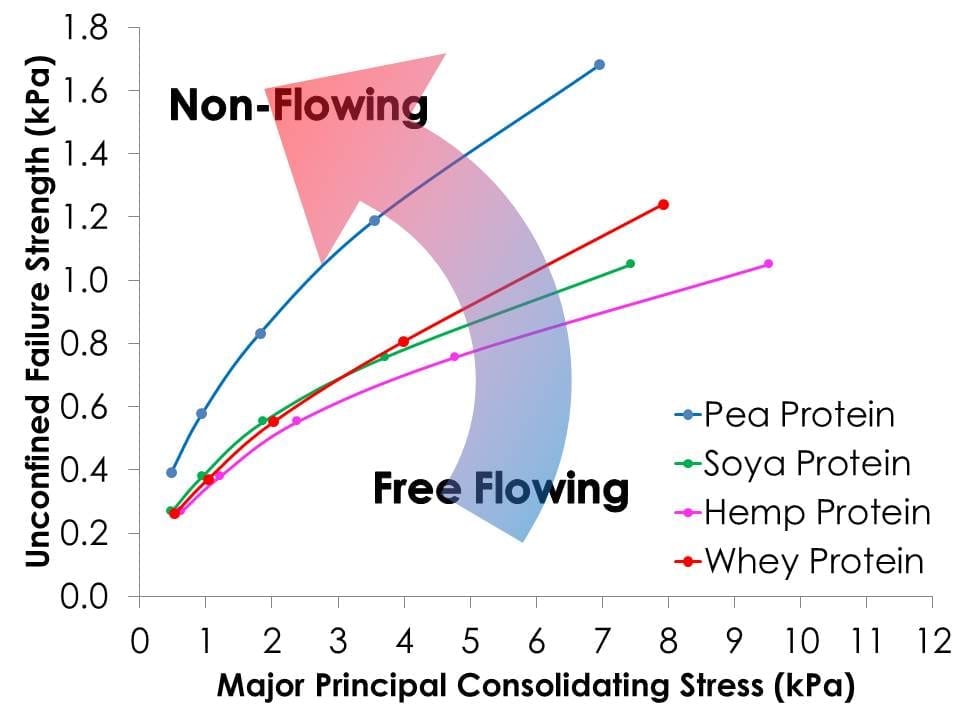 Bulk density is often taken to be a constant for many powder flow calculations. However, if your powder is full of irregular shaped or sized, elastic or brittle particles, this value can change significantly depending on the stresses applied to it. A bulk density test seeks to quantify the “compressibility” of powders as a function of consolidating stresses. If the line is flat across a range of normal stresses, the powder is incompressible, if the density rises, then the powder is compressible.

From a process perspective, dense powders provide a higher downwards force in an equivalent volume column of powder than a less dense one. This is important for understanding delivery of a known amount of material over time; A highly compressible powder may manifest problems with variable mass or volume delivery as fill levels and therefore Normal stresses in the hopper change. 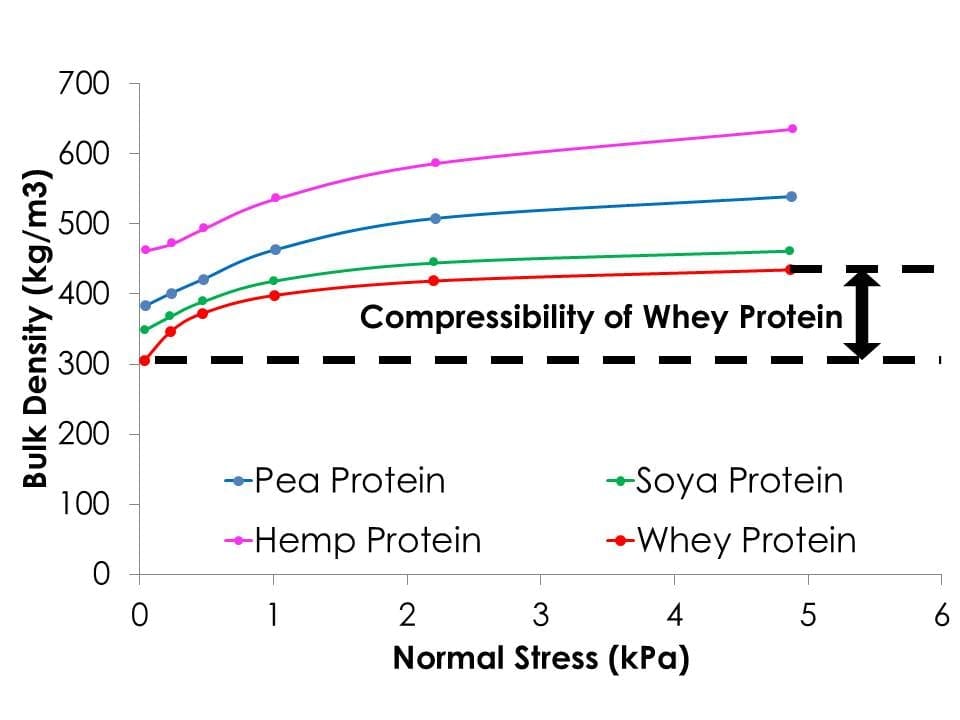 In our comparison of protein powders hemp protein has the highest bulk density followed then by pea protein, soya protein and finally whey protein having the lowest bulk density. All powders show some level of compressibility / compactability over the range of Normal stresses we investigated.

So far we have looked at physical properties that focus on behaviours of the powder interacting with itself; the main properties being internal friction, cohesive forces and compactiability. The interaction a powder has with its container walls, either in a silo or upon hopper surfaces, can also have a highly influential impact on its ease of delivery.

A wall friction test is similar in design to a flow function test but instead uses a flat ring plate, rather than a ring shear cell. We compress a powder of known volume at a defined normal stress. The powder flow tester then delicately ramps up the torque of the ring plate until it exceeds the ‘static limiting friction’ – essentially, until it slides on top of the powder. The point at which it slips gives an indication of drag of the powder on the surface. This torque value can be related back to a ‘minimum’ angle (from the horizontal) of a surface material – the angle at which a powder, under a defined normal stress, slides off said surface. 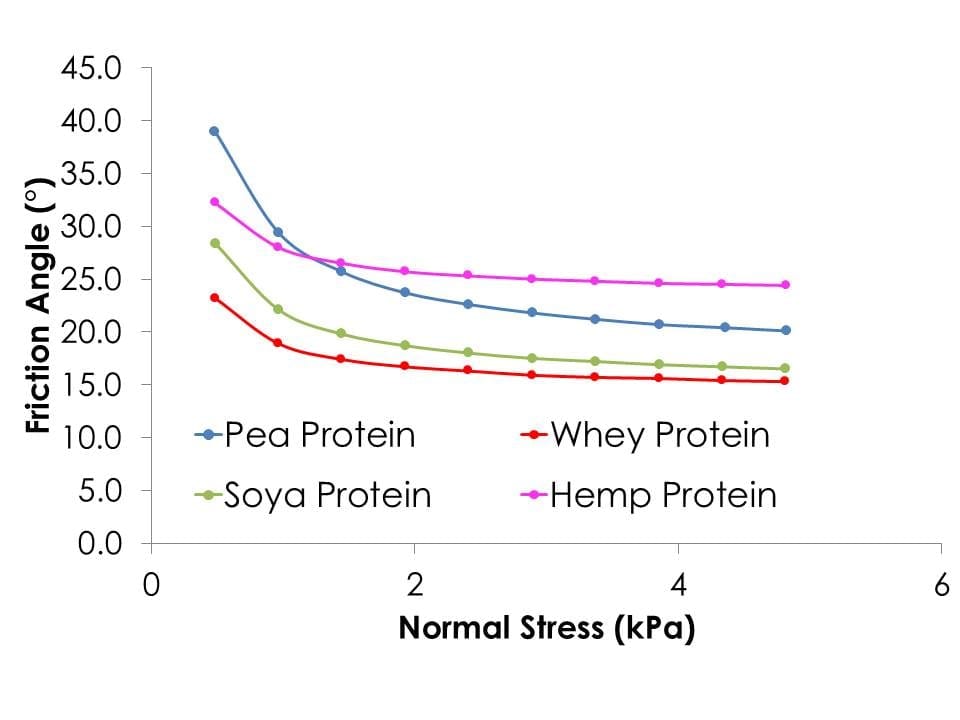 From our results it appears that pea protein powder generates the highest friction with our test surface (in this case a 304 stainless steel with a 2B finish) under low normal stresses. However, as Normal stress increases, the angle required to cause the powder to slide off decreases. Generally, in order of least steep to most steep, whey protein slides on our test surface most easily, followed by soya then hemp protein.

If you are interested in exploring this topic in more detail, or have questions about how we can perform this testing for you, please feel welcome to contact us now.