We have used both tribological and muco-interaction measurements to probe differences in the behaviour of animal-derived and plant-based meat products with a view to profiling lubricity and oral behaviour during mastication. When used in conjunction with rheological profiling it can provide powerful insights into product behaviour and potential consumer perception.

For example, when completing this work we noted that interaction of different plant-based protein extracts and mucin varied. There was a clear outlier in the viscosity behaviour of the extracts both with mucin and without, depending upon the manufacturer; most extracts showed near-Newtonian behaviour, but one showed very clear shear-thinning non-Newtonian behaviour (alt-meat D). The impact of this upon customer perception is not clear, but differing behaviour between brands may lead to new methods for benchmarking and another tool for differentiation of a ‘good’ or popular product with a ‘bad’ or poorly-performing one.

Contact us to learn more from our expert lab team

Tribology: What is it?

Tribology is concerned with the study of friction, wear and lubrication between two sliding surfaces. Traditionally, tribology involves the interaction between hard surfaces and lubricants and is a well-established tool within the chemical and materials engineering industries. Soft tribology, or biotribology, interrogates the interaction between soft surfaces, or surfaces that are present within biological systems, and is rapidly growing as a scientific field.

Tribology within Food, an Underexploited Tool 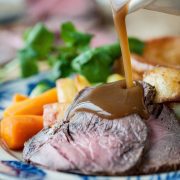 Within the foodstuffs industry, soft tribology can be used as a surrogate for the processes that occur during chewing, particularly in relation to oral lubrication. Soft tribology helps to explore mouthfeel throughout the oral processing of food. As a product is chewed, bulk rheological properties yield to tribological characteristics as layer thickness is reduced.

Tribology seeks to investigate the mouthfeel of a bolus (food mixed with saliva). Perceived mouthfeel of the bolus is partially generated by receptors detecting changes in the mouth and understanding the mouthfeel of foods can be challenging, especially when considering mucin interaction. However, using physical characterisation techniques, it is possible to categorise foods into groups governed by food rheology, oral tribology, or a combination of these features.

Although tribology is extremely powerful, its use within the foodstuffs industry is relatively under-explored. Furthermore, research into the influence of saliva upon oral tribology, which could provide significant insight into behaviours of food during mastication, is yet to be exploited. The powerful combination of rheological and soft tribological techniques with muco-based studies could provide companies with valuable insight into a new product’s behaviour or provide valuable benchmarking data against competitors.

Samples were prepared by cooking in an oven, and then poaching in a water bath (sample:water w/w 1:2) to release any water-soluble components. The resulting liquid was subjected to centrifugation to remove any solids, and the aqueous supernatant used for testing.

There were some clear visual differences between the prepared samples, Figure 1. The animal-derived meats extracts were colourless (or near colourless) whereas the samples derived from the alt-meat products produced brown solutions that varied in colour intensity. This suggests that even during extraction of these samples into an aqueous medium, there are some fundamental differences.

Soft tribology and the oral cavity

Soft tribology profiling investigates how the samples interacted with silicone, a widely accepted oral cavity surrogate. Sliding speeds during oral lubrication strongly depend on the food consumed but are estimated to be between 5–200 mm/s (or 5 x 10^3 – 2 x 10^5 µm/s). During this study, two different tribological tests were performed, one with the aqueous extracts and one with the aqueous extracts mixed with porcine mucin. Each sample was analysed in duplicate. Between each run, the tribological attachment was cleaned thoroughly with water followed by isopropyl alcohol to remove contaminants.

The first test was with the aqueous extracts, Figure 2. In all cases, as the sliding (or chewing) speed increased the frictional resistance increased to a maximum value and then decreased again. In addition, for all samples the coefficient of friction was lower than pure water, showing that the extracts were more lubricating than water alone.

Completing an analogous experiment with the addition of porcine mucin (a surrogate for human saliva) to the aqueous supernatant revealed even more interesting behaviour, Figure 2. In all cases the coefficient of friction decreased compared to samples with only water; mucin enhanced lubricity. Most of the samples showed a sliding speed against coefficient of friction profile in-line with the profile of the mucin/water control sample, and the coefficients of friction were much more bunched than when compared with water alone. However, there were two clear outliers: alt-meat products B and E. In both cases the coefficient of friction of the sample mixed with mucin was lower than that of the other samples, suggesting that alt-meats B and E behave differently in the presence of mucin and could feel more lubricious during mastication than the other samples under test.

Although this study considers tribology, collecting controlled shear rate viscosity profile data is also valuable as it allows for further interrogation of data, and a ‘sense check’ that the viscosity or tribology data are reliable.

All extracts were subjected to controlled shear rate viscosity profile (CRVP) testing, Figure 3. In a CRVP test, the rate of shear applied to the sample is changed and the viscosity measured. Data were collected on the following sample regimes: samples/water, samples/mucin, water/water and water/mucin. This allowed for rigorous comparison between data sets.

Most samples exhibited behaviour that was Newtonian, with similar viscosity to water. However, alt-meats B, C, D and E all showed viscosity values that were higher than those for water, with alt-meat B having a twelve-fold increase in viscosity compared with water at the same shear rate. Although most samples looked like they showed shear-thickening behaviour, this is likely an artefact of testing and can be disregarded. Alt-meat D shows clear and obvious non-Newtonian shear-thinning behaviour, with alt-meat B showing some slight shear-thinning across the range of shear rates examined in this study. The impact that this may have upon customer perception is unknown and may be worth investigating further.

Collecting CRVP data for aqueous extracts mixed with porcine mucin also provided additional information, Figure 4. In most cases the viscosity increased compared to the sample with water alone, which is mainly due to mucin having higher viscosity than water. The outlier was alt-meat B, where the viscosity with mucin decreased slightly. The reason for this is unknown, and may be related to the meat-substitute materials used within the product.

All the animal-derived extracts and alt-meat extracts A and C had viscosity comparable to the mucin/water control solution, showing the dominance of solvent behaviour. However, alt-meat products B, D and E all showed viscosity higher than that of the mucin/water standard. Alt-meats A, B and D displayed shear-thinning behaviour, although in the case of alt-meats A and B it was very subtle.

Plotting the CRVP data at a specific shear rate and comparison of data shows differences in viscosity with and without the addition of mucin, Figure 5. The decrease in viscosity upon addition of mucin to the alt-meat B extract can be clearly seen. The reason for this decrease is unknown, but the fact that alt-meat B undertakes this behaviour whereas none of the other samples do may warrant further investigation. For example, is alt-meat B a market leader? Does this property in alt-meat B lead to positive or negative feedback with customers?

We have shown that animal-derived and plant-based meat product behaviour can be interrogated using triborheological techniques. Soft tribology can provide insight into the lubricity of a product, and when compared with a mucoadhesion study, can be used to examine a product’s interaction with a saliva surrogate. Both techniques are relatively new to the field of food science and are at the forefront of current technological capabilities.

Looking at the data overall there are a number of other areas that could be investigated. For example, is the large increase in viscosity with mucin addition in alt-meat sample D behaviour desirable in a product? Comparing it with the meat-derived samples it certainly seems that this behaviour is more akin to an animal-derived product but is this important for consumer perception? This is also very interesting as alt-meat D extract was the only sample to show significant shear-thinning behaviour, so it is an outlier compared to the other samples.

The wealth of information provided with these tests, particularly those that include a mucin interaction comparison, could be a valuable asset and give one product the market edge over another.

At the Centre for Industrial Rheology, we perform all the tests in this case study and a whole host of others. Call us today to arrange a discussion