The use of rheology can help those in Research and Development, Quality Assurance or Process Development determine the behaviours of a grease or oil formulation at elevated, ambient and cooled temperatures. Oscillatory testing is an advanced rheological technique that allows for identification and quantification of rigidity of structures.

Thermorheological profiling completed in conjunction with an oscillatory temperature sweep can reveal significant and richly-nuanced changes throughout a temperature range and is a valuable tool for investigation of material properties.

Contact us for a tour and a chat, or send us your samples for testing

The use of a grease or oil is related to the viscosity. Oils are usually free-flowing liquids comprised of long polymer chains and can either be found naturally (e.g. from crude oil) or made synthetically. Oils are often used in machinery with rapidly moving parts as they can both reduce friction and remove unwanted heat by thermal convention, thus avoiding thermally induced oxidation or degradation.

Greases exhibit waxy, soft-solid properties at various temperatures. At ambient temperature greases are high viscosity semi-solids that reduce in viscosity when shear is applied; in other words they are non-Newtonian. They are engineered to stay in place, their higher yield stress resists sagging and slumping and maintains presence at the site of lubrication. Greases can also provide a physical barrier between a moving part and the air, sealing out harmful contaminants and removing dirt or debris. 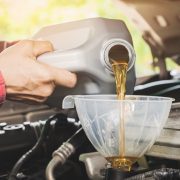 Understanding the behaviour of greases and oils is extremely important, as a poorly lubricating material can have very expensive consequences! For example, cooling a grease or oil can lead to precipitation of waxes causing the material to increase in viscosity. If an engine is started when the lubricant is cold and viscous it may fail to protect the engine from wear and tear until the oil has warmed to the operating temperature or, in extremis, may prevent the engine from starting in the first place.

Oscillatory testing is an excellent method for characterising the lubricating properties of a material as it allows us to identify the presence and rigidity of structure through the phase angle. In addition to this, thermorheological profiling using oscillatory temperature sweeps can reveal significant and richly-nuanced changes throughout the temperature range. This contrasts with more ‘traditional’ methods for profiling grease and oil lubricity such as the ‘pour point’, which is a visual test.

We set out to test the behaviour of a range of shop-bought automotive greases at ambient and cold temperatures using oscillatory rheological techniques to probe behaviours that are not visually apparent.

We then considered the phase angle change over the temperature range, which would give us information relating to the solid-like or liquid-like behaviour of the material, Figure 2. A phase angle over 45° indicates liquid-dominant behaviour and under 45° indicates solid-dominant behaviour. At 25 °C most greases showed phase angles between 10° and 13°, indicating solid-like behaviour. The outlier was grease E, which showed a phase angle of 27°, indicating less solid-like properties compared to the other greases under test. As the temperature dropped, in most cases the phase angle increased indicating that the greases were becoming more ‘liquid-like’ compared to their state at 25 °C. This increase in viscous response is counter-intuitive, and probably transitory.

Usually the cooling-induced increase in phase angle occurred below –10 °C but the clear outlier was grease E with a maximum phase angle of 43° at a temperature of 10 °C, indicating a transition towards more liquid-like behaviour albeit remaining (just!) solid-dominant. The phase angle then steadily dropped back to 12° at –40 °C. Grease B showed a significant increase in phase angle at –24 °C, to a maximum of 49°, showing that the material transitioning from solid-dominant to liquid-dominant behaviour. After this maximum, the phase angle dropped sharply to 15° at –40 °C. The reasons for these changes in phase angle are unknown, but they could be due to a rearrangement of the microstructure of the grease or a glass transition occurring.

In summary it has been shown that for all greases studied, temperature significantly affects behaviour. As greases exhibit waxy, semi-solid properties the use of oscillatory testing allows investigation into subtle changes in structure with temperature. Plotting the complex modulus and phase angle against temperature revealed subtle transformations that may not have been clear using more traditional visual techniques, and allowed benchmarking of products against each other with quantifiable data.

Analysis of the phase angle showed that cooling the greases was counterintuitive and initially led to them becoming more liquid, or less solid, but below a certain temperature the solidity increased. In everyday terms, cooling causes the greases to transition from a soft jelly to a highly viscous liquid, and then upon further cooling a very stiff jelly.

The study of lubricant behaviour at a range of different temperatures is important to ascertain during the Research and Development process, especially if the product will be used in cold climates. From a consumer viewpoint this is also important to appreciate, as putting stress on moving parts before the grease or lubricant is at the optimal operating temperature may lead to wear and tear.

At the Centre for Industrial Rheology, we have the expertise and instrumentation to investigate materials behaviour at elevated and lowered temperatures and will work with you to best address your needs.

Home » Grease is the word! Thermorheological Fingerprinting of Greases